Why is the Veyron a pinnacle of human achievement, whereas the Maybach is a useless piece of OTT badge engineering?

The dichotomy is less far-fetched than may seem at first glance. Both these machines represent the ultimate implementation of different ends of the spectrum. The design of any car can be located in a system of coordinates where one axis represents performance and the other luxury. A manufacturer needs to trade one off for the other, although both are desirable qualities; in fact this compromise is responsible for premium cars today generally lacking in ride quality. 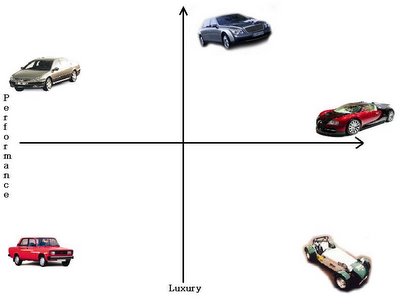 The Veyron and Maybach share a target market certainly, and they also enjoyed the same audience response when they were introduced. A few people hailed the newcomer as greatness embodied, and a lot questioned the maker's (and especially the buyer's) sanity.

Yet today the general consensus seems to be that the Veyron is a Good Thing(tm). It's certainly rare enough to not be a particular fright to the environment (for as much stock as you want to put in the whole global warming hysteria), and deep down it's a toy every man wants. Opponents are dismissed, as the only argument they can muster is "why do it?", the crushing response to which is "because we can".

The Maybach on the other hand has seen its reputation go down quickly. People see it not as a triumph of creation, but as a triumph of consumption; more wood, leather and engine than one man should have in a socially conscious Europe. Nevermind that it is not only practical, but more fuel-efficient per passenger than an Easyjet flight (and as Top Gear segments prove, most likely faster).

If you buy a Veyron, it is as if you have bought a work of art: the money is spent on something for all intents and purposes useless, but by a series of proxies you are seen to be stimulating creativity and generally improving society. If you purchase a Maybach 62, you may have as well spent it all on hookers and heroin.
| More
Posted by antyx at 7:57 PM