A god is, by its very nature, immortal.

It is said that the faith of men sustains gods. This is a tale, made up by men to convince themselves of their own worth. Faith certainly increases a god’s power, for there are very few forces in universe as strong as the will of the faithful. But a god never dies. A god without power loses its ability to influence our world. This is not a terrible hardship for a god – it can always stay in its own realm, or find another world, or – if it still has enough power – start a whole new one. The realm of a god grants it no power outside of itself, because faith requires free will. Gods may be above men, but they are natural beings. They are immortal, but almost never omnipotent. The nature of power is will.

Faith is not the antithesis of knowledge. Men from worlds where gods do not manifest think that faith is the belief in a god’s existence, but there are many worlds and many men who know gods, who see them, feel their power – even their wrath – yet do not grant them power. Men think their faith sustains gods because a god’s power is the effect of the will of the faithful.

But you cannot kill a god.

When gods manifest, they have physical bodies. To hurt a god’s body is almost impossible, but it can be done. The body of a god is made of the will that its faithful did not get to spend. This is why gods like to send the faithful into war. If a man dies for his god, the faith becomes a channel for his natural will. The power is for the god to use as it sees fit. The remnant will is what some men call the soul.

The body of a god is made of the souls of his deceased faithful. No god is omnipotent, and no power is endless. The will of a man who died for his god is not for anyone but the god to use – it cannot be drained; but it can be destroyed. To hurt the body of a god is to destroy the souls of the faithful. Their will, their essence, is lost forever; they do not rest in the god’s realm, they are not reborn into a world, they never receive their eternal reward. They are simply lost forever.

That is why, even though you cannot kill a god, all gods are cowards. 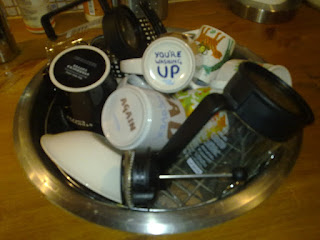 While my arch-nemesis was away, I broke into his kitchen, hoping to raid the treasure trove that is the Mingus spice rack. Imagine my disappointment when I was greeted with this bit of porcelanic sarcasm.
| More
Posted by antyx at 1:21 PM 0 comments

This is worth repeating.

What's going on here, you say?

Blogger has decided to stop supporting FTP uploads soon. So I decided it was as good a time as any to update the template.

The front page of antyx.net now lists my professional services. The blog will continue to live on right here, at blog.antyx.net. Feel free to update your bookmarks, RSS feeds, etc.

If you see anything that's broken, feel free to drop me a line at antyx@antyx.net. Or, you know, if you want to get in touch with me for any other reason.
| More
Posted by antyx at 2:00 PM 0 comments

It's Theater Thursday: I happened upon an opportunity (or rather, being a lazy sod recently, had it thrust upon me) to see the opening night of the Tartu New Theater's Cooking Captain Cook at Genklubi.

And d'you know what, I really enjoyed it.

I won't analyze or review the play in detail, because I don't want to prescribe the meaning that you are meant to derive from it. It was not a bold manifesto, a cultural landmark, or a performance that will live on in legend; rather it was an excellent piece of theater, and is tragically rare these days. In fact, I would maintain that at this point in time, in this country, small, enthusiastic, semi-professional troupes such as Tartu New Theatre provide a far superior experience than even the best of the established institutions.

A few months ago I saw the new version of Richard III playing at Sadamateater, produced by Vanemuine and directed by some presumably impressive Englishman, and it was boring as shit. Except for a rather decent performance of the title character, this play, the highlight of Tartu's theatrical season this winter, was utterly devoid of soul or imagination. It might have been because of Shakespeare, of course - the instance of War of the Roses I saw some years back at Leigo was equally bland: it is as if an entrenched authority can only be tackled via three hours of generically postmodernist "look how clever we are" wankery. The last performance I remember myself truly enjoying - so much in fact that I went back and saw it again on its final night - was a drama about quarterlife angst by a Russian-speaking student theater in Tallinn, and if you've been reading this site for a while, you'll have an idea of how I normally feel about angst.

Theater's initial purpose is to tell a story, but now that we have more efficient media for that, its purpose is to make you feel. Art's worth is properly measured by its effect on an unprepared reader, and from what I've seen of Estonia's theatrical establishment - from Vanemuine to Linnateater to whatever is left of the Russian Drama Theater these days - it has devolved into an incestuous circle jerk, and any new blood it chooses to co-opt is inevitably as pretentious and uninspiring as the old guard. Good theater makes you feel, and it makes you enjoy yourself; if you're not a theater critic by trade, if you go in without preconception and come out feeling unsatisfied, at best thinking that it may have gone above your head, but it sure felt clever - then you were ill-served by your entertainers. The fault lies with them, not you.

Cooking Captain Cook is different by way of its simplicity. There is certainly meaning to be had there, and pleasure, but the performance won't make you work for it. On Tartu's premiere bohemian stage, Tartu's aggressively anti-traditional theater has put on something that is, in a very old-fashioned way, just plain good.
| More
Posted by antyx at 8:37 PM 1 comments

More lawmaking commentary today. Two interesting bills are up for a vote in the near future:

1) Establishing an LLC without cash.

There are a bunch of different ways to do business as an individual in Estonia - from signing ad-hoc contracts with your customers (the way I do it with translation agencies), to registering as self-employed, to starting a limited liability company.

Self-employed status gives you a bunch of benefits, such as a VAT number and the ability to write off business expenses, but also some inconveniences in terms of how you pay tax. Incorporating as an LLC is the best way to go, and the process is streamlined: you can do the entire thing online in half an hour. The big hurdle is that you need to have the starting capital, 40,000 EEK (~2500EUR). Up to half of it can be made up of material assets without additional paperwork, but you still need to have a pile of cash that will be tied up in the business. You can get the money out of the company's account right after it's established, but what if your business doesn't require any material investment? The only tools of the trade I need to run my freelance work are a netbook and an Internet connection. Now, I could use the LLC's starting capital to pay for both, VAT-free - but it's still very inconvenient to tie up 40k in a business with very little up-front investment and negligible recurring costs.

The new bill will allow an LLC to list the up-front capital as the founding partner's liability. Basically there's still 40k on the books, but it doesn't have to be an actual pile of cash or a bank balance. If someone has outstanding claims against my company, they can sue me personally to take up to 40k's worth of my personal assets.

The upshot is that anyone with a bright idea can incorporate over a lunch break, and start doing business immediately. Considering that we're a small country that is trying to stimulate high-tech, dynamic businesses where the principal investment is the owner's time and effort, this is an excellent move, and frankly I'm a bit disappointed that it took the government so long to get to it.

The gist of this is that a borrower's liability will be limited to the collateral. When a homeowner can't make the mortgage payments, the bank's only recourse will be to sell the house, and the borrower gets to walk away from it. Currently, the borrower is liable for the actual loan amount, so if the house is worth less than the balance of the loan, he'll have to keep paying. The only way to wipe out the debt is to go through a personal bankruptcy, which means five years of constant supervision by a court-appointed administrator.

I don't actually like the idea, because in my opinion the government only has a very minimal responsibility to protect people from their own stupidity, and overpaying in a booming market is the sort of mistake everyone should be able to make on their own. Certainly the economic liberals in power are also against the idea, as are the Swedish banks. Normally I would dismiss it as just another piece of populist legislation that has no hope of passing - it was introduced by the Social Democrats - but the BBN article claims there is support for it in the ranks of the coalition as well.

I'm pretty sure hell freezes over before Reform supports the bill (but then Jõgeva has been seeing -30C temperatures this winter), but there is at least one line of reasoning that might convince some IRL members with re-election jitters to go along with the plan: it's not like we're overly sympathetic to the plight of the banks. The effects of the property bubble's burst in Estonia could have been far more dire if we didn't have relatively strict lending rules in place already - most importantly, the loan amount was a direct correlation of the applicant's income, there was no widespread practice of giving "interest-only for the first three years" type mortgages to deadbeats trying to flip properties for a short-term profit. The insane growth in Estonia's real estate prices was precipitated by low interest rate margins and growing salaries.

So stricter-than-elsewhere banking regulations made the inevitable crash not as disastrous as it might have been, and by the same token, new and even stricter banking regulations are probably a Good Thing(tm) as we're recovering from the credit crunch. I still don't think it's necessarily a good idea, but if the Riigikogu's right wing sees a need to engage in some kind of populism, this is one of the better bills to support: it is straightforward in principle, has no immediately obvious loopholes, and its primary negative consequence is that banks will be forced to only issue home loans to people who can afford them, on properties which are more or less reasonably priced. Interest rates will go up, the construction industry will suffer another hit, and fewer people will be able to build equity rather than just spend a portion of their income on rent, but at least we'll have learned from our mistake and will be forced to rely on something other than real estate for our economic growth.
| More
Posted by antyx at 2:50 PM 2 comments